Blog
You are here: Home / Blog / General Skilled Migration (GSM) / The times they are a changing – in Australia, the UK & the ...

The EU referendum for #Brexit has led to a huge interest for visas for Australia. With the July 2016 changes it may be a god time to look at your options

The news out of the UK last week was obviously significant for all, whether you supported Remain or Leave or were unsure or indifferent or couldn’t vote. What #Brexit does represent though is a period of uncertainty for everyone in the UK, and Europe, regardless of the when or if (as some people have suggested) the official divorce proceedings commence.

There are also important (though not as globally relevant) political matters taking place in Australia this week, with a Federal election on Saturday July, 2nd. This will be the fourth election since 2007, and for most people in Australia hopefully the last until the elected government’s term runs out in 2019 (3 years).

The #Brexit vote though has stirred up the republican debate in Australia further. The Australian republican Movement (ARM) feels that although if is different circumstances, if it is good for the UK to choose to leave the EU, then it is good enough for Australia to revisit the Republican debate and a potential referendum in the future to decide this.

This subject was last visited in 1999. However the 1999 referendum decision was unanimous however you slice and dice it. 95% of registered voters (once you are registered voting is compulsory in Australia)  turned out and there was a clear majority of  55% to 45%.

Whilst no one knows what the future holds for the UK & their place in EU, what we are certain of is that people are really looking at their immigration options to Australia.

In the days following the EU referendum online searches for Moving to Australia and visas for Australia increased greatly. 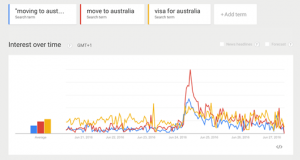 Over the next few months there will be some changes and announcements made about immigration pathways and visas to Australia.

Starting with 1st July, the new financial year in Australia, there will be changes implemented by the by the Department of Immigration & Border Patrol (DIBP). Some of these changes will include:

If you want an assessment of your options please get in touch or keep an eye out on our blog where we will detail these changes and let you know about our immigration services.