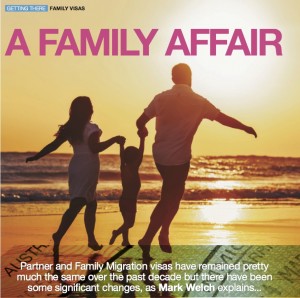 The Partner and Family migration programs in brief allows for spouses, de facto partners, fiancees or certain family members to be sponsored by an eligible individual  – known as a sponsor – to migrate to Australia. The Sponsor must be an Australian Citizen, Permanent Resident or an eligible NZ citizen and either the partner or an appropriate relation to the applicant/s for the visa class they apply for.

Whilst these Partner & Family Migration visas have remained pretty much the same at their core over the past decade or so, much like skilled migration there have been some significant changes and they are worth taking note of. Especially if they may effect a potential application. In this piece I have considered some, but not all the visa subclasses, that fall in these programs and provided some comments on the visa itself as well as changes that have taken place. The visas I have considered included the Partner visa, Prospective Spouse visa. the Child visa, the Parent visa, the Contributory Parent visa and the Remaining Relative visa.

Starting with Partner visas, as per the name of the visa these are for applicants who have an Australian partner. Applicants can apply for these visas whether they are married or in a de facto relationship for at least 12 months (although there are some limited exceptions to the 12 months) with their Australian partner.
The applicant must provide evidence that their relationship with their Australian partner is ‘genuine and continuing’ and they must meet the public interest criteria of being of good health and character.
Whilst this general criteria has not changed in the last decade or so there have been some notable changes. This starts with with the definition of ‘spouse’ and ‘de facto’ partner. Prior to 2009 these referred to a man and a woman, but since then it now includes same-sex relationships.
It has not changed to the extent that same sex-marriages are recognised for this visa – although no doubt his will change in time – but to the extent that prior to 2009 same-sex couples had a different visa subclass to apply under. This visa was known as the Interdependent visa.
In addition to the above Partner migration now recognises the growing influence of formally recognised relationships outside marriage – be they opposite sex or same-sex.
Partner visas now recognise that if an applicant has their relationship registered with an Australian state then the 12 month de facto requirement can be waived. You will note that this is a state requirement, so the requirements do differ from state to state.

From a more practical perspective the processing times for Partner visas have generally increased over the years. Only a few years ago there was a program for “decision ready applications” that saw some visas approved in a matter of days, where as current processing times can vary from 8 to 18 months depending upon where you are and your circumstances.
The final significant trend has been the increase in application fees over the last 10 years – resulting in a tripling or quadrupling of the application fee in the last 10 years.
Whilst this has not been warmly received by applicants nor migration agents, it has resulted in applicants being more considered and thorough in the initial lodgement of their application than has been the case in the past. Mistakes and delays, when you spend a significant amount of money, aren’t appreciated.
If it is any solace all Partner visa application fees are now the same. This was not always the case, with offshore and onshore application fees differing by a significant amount.

The fees for a Prospective Spouse, a visa that you can only apply for outside Australia, are also consistent with the all these partner visas.
For Prospective spouse visas the key change, again, is the processing times. So again while the core requirements have not changed, applicants still need to marry their fiance within 9 months of having their visa granted. These lengthier processing times though have resulted in applicants being more considered in how they plan for their wedding and ultimately their move to Australia. Flexibility, and openness to accept changes may need to be made to your plans is important.

For applicants that apply for Child visas, these have remained relatively stable over recent years. The applicant must be the child of an Australian as well as be either be under 18 years of age, or under 25 and a full-time student or is unable to work due to a disability and is dependent on their parent.
With regards to changes, like most visa subclasses, fees and processing times have generally increased, so applicants, or parents of applicants need to be aware of this. If you are considering a Child visa application, you need to first consider whether a Citizenship by Descent application may be more relevant. Australian Citizenship is generally a quicker, less expensive and ultimately and ultimately significantly better outcome than the permanent residency that you obtain as a Child visa holder. 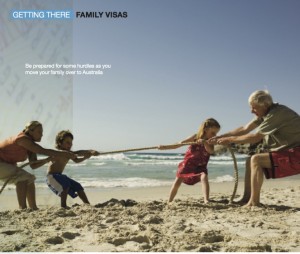 For applicants who have children in Australia they can consider one of the Parent visa options. The simpler, more straight forward option is to apply for a Parent visa.
To apply for this, the applicant/s must be sponsored by a child that is settled in Australia and they must be able to meet the “balance of family test”.
To satisfy this test the applicant/s must be able to show that at least half of their children or more of their children, reside in Australia than anywhere else. Along with meeting health & character requirements it seems like it is too good to be true, which it is unfortunately. The drawback is that it has a lengthy waiting time, approximately 30 years at present.

The quicker visa option for a parent who meets the above is the Parent Contributory visa. The significant difference is that the applicant/s
must be willing to pay a higher application fee that that of a Parent visa application to cover future medical costs.
The fee at present is a minimum (there are a couple of different visa options) of $43,600 AUD each applicant. This fee, in addition to a 10 year assurance of support bond of $10,000 AUD, or $14,000 if there are 2 applicants, makes it a costly exercise.
However, as the vis processing can be reduced to between 12 and 24 months, the reality is that this is the only practical and definitive visa option used by applicants form this par too the world, especially when there is the added hurdle of capped visa numbers for the Parent Contributory visa each year.

The final visa that I will discuss is the Remaining Relative visa. This visa is for an applicant (and their partner/spouse) that has no other near relatives – parents, siblings, children – residing outside Australia.
Your application must be sponsored by an eligible near relative and you must meet health & character requirements. Based on the criteria it can be a difficult visa to be eligible for and for those that are, there are further issues as the this visa is also capped in numbers.
In fact in in 2011 there was a reduction in the number of places available of 70 per cent. Since this time the number of places has dropped again, including the current financial year of 2015-16. This is exacerbated by the fact it also competed for places with other visas, not detailed here, such as Carer Visas and Aged Dependent visas.

Considering some of the information outlined above there are a few key takeaways. Firstly, the level of difficulty in applying for one of these visas doesn’t always depend on your personal circumstances and your ability to provide the evidence and documentation required to meet the criteria.
Secondly, you need to be patient and organised. Delays will likely occur in some circumstances and you need to be wary of these.
Finally, planning your visa application and for the visa process itself, is more important than ever. This may mean that you bring forward the timing of the visas, or it may mean that you consider where you are when you apply, be it in Australia or outside Australia.
Then there are the associated matters of moving – schools, housing, employment…. The list goes on. At the very least, keeping on eye on what is happening, or appointing a qualified person to do that for you is more important than ever.

Mark Welch is a registered migration agent and director of Cargil Migration, which provide Australian immigration services to Australia from the UK. For more information visit www.cargilmigration.com .

What our clients say about us ….. 2015-2016: Skilled occupations and Australian immigration
Scroll to top
Manage Cookie Consent
We use cookies to optimize our website and our service.
Manage options Manage services Manage vendors Read more about these purposes
View preferences
{title} {title} {title}